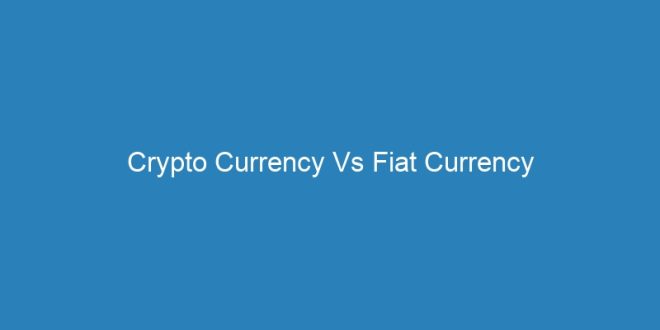 Do you know fiat currency and cryptocurrency? Both are currencies in one form or another and are open to general use worldwide. But they are both different and different in their own way. There is always one group that prefers to use crypto while another has a soft corner for fiat currencies. 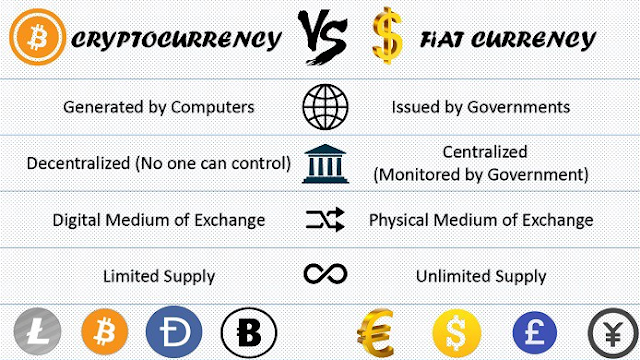 In a cashless society, cryptocurrencies play a major role

If you look at the markets of the 1970s and 1980s, cash plays a dominant role. But with the development of technology, electronic transactions have become commonplace. Nowadays, more and more people are being influenced to become a cashless society. With the advancement towards a cashless society, cryptocurrencies play a big role.

Hence, the differences between cryptocurrency and fiat currency are noted as follows:

• Cryptocurrencies only exist in the digital area. On the other hand, you will find that the fiat currency has a tangible and physical form.

• There is a limited supply of cryptocurrency with a maximum amount that is offered in the market. In fact, there is unlimited availability of fiat money as governments and banks have the right to produce coins and banknotes whenever the situation calls for it.

• Cryptocurrencies are represented as public and private codes. On the other hand, fiat currency is presented in the form of coins and banknotes.

Over the past decade, the popularity of cryptocurrencies has proven to be a huge success. That was in 2009, when Bitcoin was first introduced, and years after several other types of cryptocurrencies emerged. Starting from Litecoin. Dogecoin, Ripple to Dcash and Zcash, there are many of them. On the other hand, the fiat currency has rich and ancient roots, with the Great British Pound dating back to AD 775. It is considered to be the oldest currency in the world that is still in use.

Difference in anonymity between the two currencies.

• The degree of transparency in cryptocurrencies is given greater consideration. This is because the source of income is shown in a public chain. Everyone can witness their own transactions and those of others.

• Fiat or government. Currency is not transparent because there is no public chain to see people’s income streams.

When you compare cryptocurrencies to counterparty, fiat or government currencies, you will find that their existence and creation makes a difference. Fiat, or national currency, has been around since 775 AD with the introduction of the great British pound. Because of this, fiat currencies are easily accepted by people all over the world.

Crypto coins, on the other hand, were likely only introduced a decade ago, with the introduction of Bitcoin in 2009. The challenge for Bitcoin and other cryptocurrencies is the pursuit of the immense popularity and growing fan base of fiat currencies. . Cryptocurrencies are undoubtedly becoming important and popular in the market economy, but they are still not widely accepted as fiat currencies in society.

History of the comparison of the two currencies:

• It was in the 11th century when China’s Song Dynasty was probably the first to use paper money issued. It may not be exchanged for objects of value such as gold and silver or silk.

• 1971 was the year in which the fiat currency found worldwide recognition. President Nixon introduced it to remove the system of classifying the dollar against gold.

• It was 1998 when Wei Dai came up with the idea of an anonymous electronic money system. Bitgold – the first cryptocurrency was developed by Nick Szabo, but it doesn’t get as much attention as Bitcoin.

• In 2009, Bitcoin was launched, which was the first cryptocurrency to be accepted worldwide. A number of other cryptocurrencies were introduced in 2011 and beyond. Some of the most popular are Litecoin, Dogecoin, Ethereum, Ripple, Zcash, Dash and so on.